Posted on 11. March 2020 by christenfindenruhe 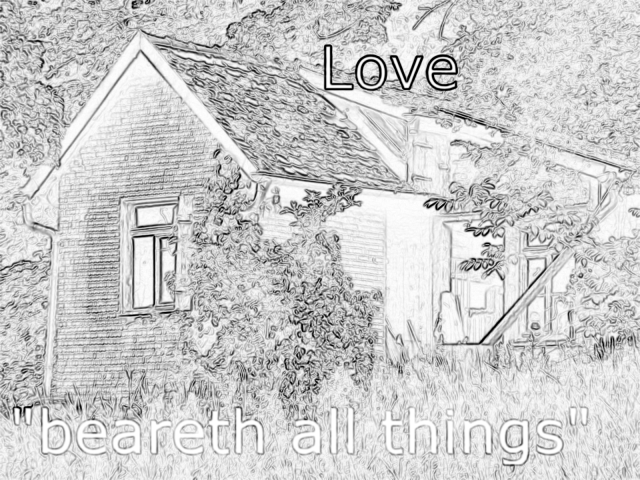 Love in spite of Difficulties – 1 Corinthians 13:7a

One of my goals in writing this blog is to be helpful to Christian believers. Then also I would like to point out to anybody who comes across this site, how to set out on a pathway with God.

Besides this, of course I am studying the bible. I am trying to figure out what 1 Corinthians 13 might mean. I am thinking about how this chapter could become meaningful to day-to-day Christian living.

As I recently concluded my consideration of verse 7a I found I had shared some very important things in these posts. I thought you might benefit from rereading these posts in one go.

This is why I have been preparing the PDF I am offering to you today. My statistics page shows that so far there have been a number of clicks on the link I have previously published. Yet I want to make it easy for all my followers to make hold of this booklet. So today I am offering it again.

I intend to leave this post sticky on the top of my site for some time. So anybody who visits my site can read this offer and download the booklet.

It is a booklet of 13 pages. In these blogposts I have shared some fundamentals to Christian Living. I have been trying to introduce you to some important concepts on how a Christian can get through difficult times.

You may freely share this booklet provided you leave it unaltered.

Seek God and Feel After Him

Posted on 23. June 2021 by christenfindenruhe

“And he hath made of one blood all nations of men for to dwell on all the face of the earth … that they should seek the Lord if haply they might feel after him, and find him, though he be not far from every one of us.” (Acts 17:26+27/KJV).

St. Paul here is speaking to a heathen audience in Athens. Obviously he knew how to speak to people who were not members of his own native religion.

To the apostle the God of Israel was not merely an ethnic deity. In the torah it was clearly said that God had created all the earth and the first human beings from whom all humankind has sprung forth.

Paul says that God is not far from each of us. We are from God. We are his creation. We originally have been created in God’s image. Thus we can somehow have a feeling of what God is like.

The Athenians had been seeking after God by building an altar to the unknown God. (Paul said he was proclaiming to them that unknown God, the creator of the whole world).

Of course Paul also knew that several of the Greek people readily gave themselves to reasoning about just anything. Greece was a nation who brought forth great philosophers. Philosophy is an attempt to gaining some understanding of human life.

In our Western culture we know that philosophers also argue about what God would be like. They observe many things in human life and in history. From that they seek to find out about God.

Paul says it was God’s purpose for men in all parts of the earth that they should seek after God and that they should feel after him. He emphasises that God is not a stranger to us as we originate from him.

As you read more of Paul’s sermon to the Athenians on the Aeropagus, you will find some very clear statements. God wants to lead men beyond mere reasoning. God now calls all of us that we should repent. God wants us to adjust our lives and our attitudes to his standards. One day God will judge all of us.

God has revealed his will to us. He wants to speak to us through the Old Testament and the New Testament.

God wants us to seek after him. It is his purpose for us that we should try if perhaps we can find him. There is a chance we can learn something about God by considering human nature and our origins. Then God also has spoken to men and he has sent messengers.

But one day we, all of us, will have to stand before his throne. We will become aware of what God is like and we will see what our lives look like in God’s eyes.

Maybe at that point, what I have written today can help you to better understand some of the words in 1 Corinthians 13 that I am currently dealing with:

“For we know in part, and we prophesy in part, but when that which is perfect is come, then that which is in part shall be done away. … For now we see through a glass darkly; but then face to face…” (1 Corinthians 13:9+12/KJV).