Posted on 30. March 2016 by christenfindenruhe 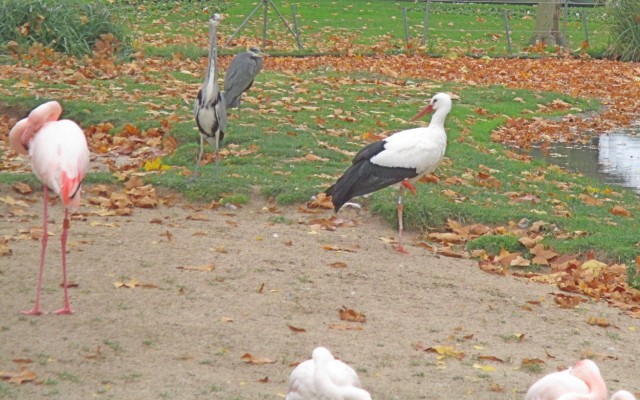 The picture shows a storch, a flamingo and other birds in Stuttgart zoo (Wilhelma Stuttgart). I wonder: How about communication between them.

In the Middle-Ages prior to the Protestant Reformation in European Roman Catholic Churches the mass was celebrated in Latin only. Prayers prayed by the priest were in Latin language. Bible readings were taken from a Latin version. If any sermons were to be given, often this would be done merely in Latin.

Theologians had to learn the Latin language. Many of them were used to speaking or writing in Latin. Yet some of the lower clergy did not really know this language. They were to conduct services and they were reading prayers or reciting bible verses in a language unintelligible to themselves.

I am trying to figure out what ordinary people could have benefitted from the celebration of the Latin mass. They did not understand much of what was going on. They could observe some of the rites performed. They could marvel at the beauty of a church building. They would try to explain to themselves what was going on following their own understanding. They would watch out for anything they could relate to.

In contemporary churches and informal Christian meetings sometimes strangers, who do not speak the same language as the others, visit a service. Some of them will be allowed to lead the congregation in prayer. They will pray in their own language. The others will marvel at the sounds but not understand the words. From the attitudes displayed in the prayer they possibly will be able to conclude that the praying stranger is an earnest Christian.

Some guest speakers in church services do preach in a language unknown to most of the congregation. Somebody will translate.

We know of instances in church history and in the present where Christians were or are confronted with languages unknown to them. Even in the internet you may find Christian messages given in languages unintelligible to yourself.

I am still dealing with 1 Corinthians 13:1. In my last post I have stated that “speaking in tongues” could refer to languages.

By “speaking in tongues” Pentecostal or Charismatic Christians mean speaking or especially praying in an unlearned language just as the Holy Spirit leads. Occasionally very brief messages will be given “in tongues” and others will pray that they might be able to interpret. More commonly believers will pray by themselves using a language as given by the Holy Spirit.

If you claim to speak or pray in words unknown as the Spirit of God guides you, make sure you are doing so in the right spirit! “For God did not give us a spirit of timidity, but a spirit of power, of love, and of self-discipline.” (2 Timothy 2:9 NIV).

Paul emphasises prayers should be made “without anger and disputing” (1 Timothy 2:8 NIV). Whenever you pray, please do so in a loving attitude. If you should pray “in tongues” make sure you are guided by the spirit of love! – Paul says: “If I speak in the tongues of men and of angels, but have not love, I am only a resounding gong or a clanging cymbal.” (1 Corinthians 13:1 NIV).